In passing, my co-worker Kara, mentioned that she had lived in Idaho.

“Oh really?” I said. “That is really interesting.“

She said something to the effect of: “That’s not what I usually hear”.

Yes, I’m talking about Idaho. Please stay with me on this… I had mentioned that my daughter Heather, years ago, had shared a link with me about a resort in Idaho. It looked amazing, the mountains, the rivers, the sky. Especially the night sky. My father was a radio astronomer; as a child I grew fond upon gazing upward, mesmerized by the celestial ambiance… In the absence of light pollution, you can actually see the Milky Way. What followed was a discussion of all that you can do in Idaho – horseback riding, whitewater rafting, sky gazing, fishing, skiing. My vacations are adrenaline fueled. I am in perpetual motion on vacation, whether it be scuba diving, canopy tours, tubing, climbing a waterfall, off-roading, whale watching. Idaho was beckoning!

I remembered the week before I developed in the classroom. I overheard a few tutors having a discussion about time zones (attendance was light; conversation ensued). I did what any “normal” person would do: I wanted to join in on the discussion on time zones. I had learned a lot about this topic while in the property preservation industry where I called vendors to complete work on properties in foreclosure. Between waiting for it to be an appropriate time to call, to realizing little to no work will get done after the sun sets, the information became burned in my memory.

Me: “Idaho has an unusually early sunset. In the panhandle, after the time change in the fall, the sun sets a little after three, which sounds too awful to endure. But what is really interesting is that you can drive EAST over the Salmon River, and cross into a WESTERN time zone. The panhandle, in their affinity for a more liberal West Coast, chose the Pacific Time Zone, where the southern part of the state – which is much more conservative – chose the Mountain Time Zone.”

I have always had an affinity for knowledge and geography thanks to, in part, my father. Some of my earliest memories of him are of the two of us working on map puzzles together. Unintentionally, I memorized all 50 states. Experientially, however, it helps that I had visited my father in Massachusetts, road tripped with him from California to Texas, visited Disneyworld, joined my father on his observing runs in Arizona… My father was a world traveler; the breadth of his travels is inspirational. It fueled my obsession with traveling which has now been passed on to my daughters. My father would return from his trips with his pictures, which he shared via a slideshow. Not a PowerPoint, an actual side show. Whether it was Ecuador, the Soviet Union, Cuba, Tibet or Nepal – yes my father has actually climbed Mount Everest – not to its peak, but still…

I then reflected on a funny conversation with my friend, Jaime, while we were in California this year. As our eyes gazed upon the mountains and desert landscape, a small copse of succulents in the foreground, a discussion commenced regarding our NEED of interesting landscapes. I joked how awful it would be to live in Iowa. I woke up the next day to a Facebook notification – once again, something Jaime and I had discussed popped up during a stroll on social media. It was a meme that said, “Stop complaining about your life. There are people who literally live in Iowa right now.” (Cue giggling in the background that lasted longer than necessary).

Yes, I’m quirky! I’m only now fully embracing it. And, if I just made you realize that even time zones lean left or right – and you enjoyed it – you are quirky as well. 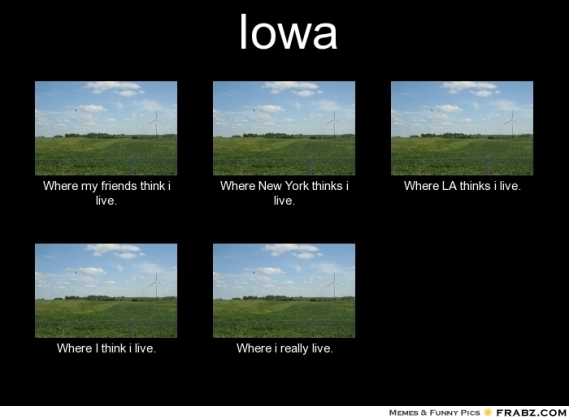